What a privilege to have been able to nominate Graham Hodgson for this award. It was a real pleasure to accompany him and his wife, Lynne, to County Hall on 10th April 2019. His citation reads:

Graham has been an integral part of the Godalming community for nearly 40 years. He has been a Governor and the Chair of Governors of Godalming Junior School and Broadwater School, Committee Member of Godalming District Scout Executive, Water Advisor for River Wey British Canoeing and Assistant to the Royal British Legion Area Organiser to name but a few.

Most would recognise Graham as Major Hodgson, the Parade Marshal of the Town’s annual Remembrance Day parade, a role he has proudly carried out for the last 28 years, however his commitment to community life has not been limited to just one cause or purpose.

Graham has used his skills and knowledge to benefit a wide spectrum of our society. He has been a positive influence to the generations of young Godhelmians, especially in his capacity as a school governor and his active role as a canoeing coach with Godalming District Scout Canoe Club.

We are indeed fortunate in our community of Farncombe and Godalming to have so many great local volunteer groups and organisations providing support and care.

These photos show just a few – the Farncombe Day Centre offers a welcome, advice, companionship and hot food, as does the Denningberg Centre.

The Lions collect funds for others all year round as well as contribute to emergency situations.

And one of the highlights of this Christmas season  for me was the choir from Broadwater School singing, “O Holy Night”, at the Town Carol Service.

By working together we can do so much more – may we never take our community for granted but accept the gift of those who give so generously and that includes the volunteers from Churches Together who give many hours of Christmas Day itself to the Lunch for those who would otherwise be on their own. 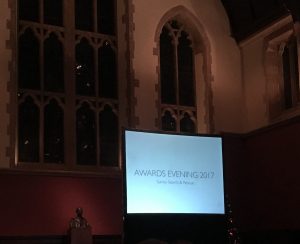 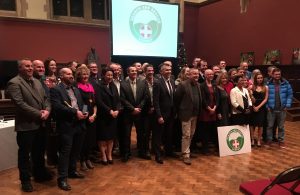 Awards were given to those who had placed themselves on call for 1000 to 5000 hours. These volunteers’ commitments, freely given, is worthy of high praise.

Surrey Search & Rescue is a 100% voluntary specialist search team which helps the emergency services find missing vulnerable adults and children. They are on-call 24 hours a day, with a team of 50+ people and 8 Search Dogs to respond across Surrey and surrounding areas.