The truth about the UK Post Office and the Horizon System is coming out at last.

Thanks to Eleanor and all who have challenged the Post Office and supported Chirag and his family and Farncombe Post Office through this David and Goliath battle.

This is what Chirag has had to put up with! The truth about the UK Post Office and the Horizon System is coming out at last. Respect and support for Farncombe’s Post Office.

Liberal Democrat County Councillors in Surrey have heavily criticised the Conservative-administration at County Hall after Conservative Councillors awarded themselves thousands of pounds of extra allowances in a vote at Council yesterday. The vote means that 4 new Deputy Cabinet positions will be created, at a cost of £40K a year, as well as extra allowances for committee vice-chairs.

Liberal Democrat County Councillors opposed these increases and voted against them at County Hall.

“At a time when residents are looking to Surrey County Council to increase its cost effectiveness, and at a time when severe cuts in services are proposed, the Conservatives should not be looking to award themselves a pay rise. Many of our residents have had no real increase in their income for ten years and they will be appalled to see these increases voted through. The overall cost of allowances for members should be capped for three years and any adjustments made by moving money within the existing budget.”

“I told the Leader of the Council yesterday how I disappointed I was with his proposals to pay thousands of pounds of additional allowances to Conservative Councillors, whilst at the same time proposing huge cuts to essential services. The County Council is telling residents that difficult decisions need to be made on spending but at the same time is able to find extra money to keep backbench Conservative councillors happy. I am calling for the Conservative-administration to reverse this decision and instead put this money into front line services.”

A webcast of the meeting can be found here (with the Item on allowances starting at 1:39:00):

A copy of the Leader’s response to the Independent Remuneration Panel report can be found here:

The Council papers for this item can be found here (Item 15):

Kate Peters and I were pleased to be present for the launch of the new minibus for Farncombe Day Centre earlier today (1st March). Kate is Director of Grants and Impact for the Community Foundation for Surrey (Local Giving for Local Need) and I am one of the Trustees of the Thomas Trust which donated £10,000 to this worthwhile local project.
The Trustees of the Thomas Trust transferred the Trust’s capital to create a bespoke Community Foundation Fund in 2014 and we continue to award grants to care for elderly, disabled and blind people in the Godalming area.
Betty Thomas was a forthright lady and very determined that the Trust she intended to set up should be run professionally and fully exercise her wishes and stipulations. Her concerns for the elderly, blind and disabled demonstrated her kindness and desire to assist on a long-term basis. 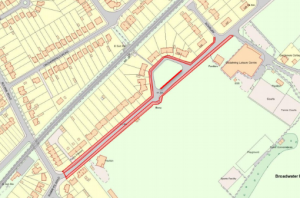 Surrey County Council will be carrying out pavement reconstruction in Summers Road in Farncombe from the junction with Bourne Road to the junction with Rowbury and Godalming Leisure Centre.
The carriageway will be under temporary traffic control during the works.
Start date: Monday 19th February 2018
Duration: For approximately 8 weeks
Monday to Friday – 09:00 to 15:00; Saturday – 08:00 to 17:00 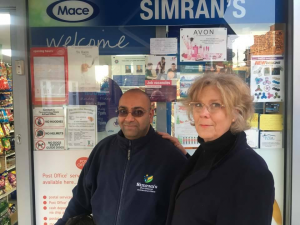 On October 10th, 2017, Simran’s Convenience Store Post Office in Farncombe (Postmaster Chirag Sidhpura) was closed when the Post Office’s first audit in 5 years of operation indicated huge six figure financial discrepancies.  Immediately, Mr Sidhpura strongly challenged these discrepancies, noting that he wouldn’t have been able to trade if there was a deficit of that amount, as he wouldn’t have been able to complete any transactions. Nevertheless, to show his complete commitment to the Post Office and the service he provides to Farncombe, he supplied sufficient funds to offset the discrepancy in good faith that the subsequent financial investigation would vindicate him completely.

And, indeed following this investigation, criminal charges were dropped because no evidence of malpractice was found.

Surprisingly, on 5th February, Mr Sidhpura received a letter from the Post Office informing him of the termination of his contract without the right of appeal. The Post Office has not returned the funds he submitted following the audit.

On Friday, February 9th after meeting with Mr Sidhpura,  Jeremy Hunt MP said, “It appears to me to be grossly unfair and unjust”, given that no evidence of malpractice has been found and that he has proof that he has followed all necessary procedures over this time.

Penny Rivers, County Councillor for Godalming North said, “the Farncombe Post Office provides a service to thousands of residents of this village. During the infamous Christmas floods and power cuts in 2013, it was the only shop that stayed open for miles, it was a life-line and kept us all in batteries, candles and firelighters during that dark time. The Sidhpura family did not desert us in that time of trial and we must not desert them now. We urge the Post Office to consider his appeal. He is one of hundreds of sub-Postmasters who have been treated in this way”.

Rector of Farncombe, Revd James Rattue, said “this community is shocked by the outcome of events at the branch post office. Quite apart from the impact the actions of Post Office Ltd on the Sidhpura family, the people and businesses of Farncombe will be considerably and adversely affected by its closure. We expect accountability and legal process. Chirag Sidhpura has shown respect for both: Post Office Ltd has shown neither.”

The Post Office is facing a class action suit from more than 500 of its sub-postmasters, who claim that a faulty computer system led to them being wrongly accused of false accounting or theft.  https://www.jfsa.org.uk . 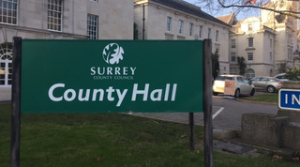 “This budget contains drastic cuts to services such as libraries, road maintenance, services for children and families as well as cuts to support for people with learning disabilities. They come on top of the unpopular cuts which have already been made to services including highways, community recycling centres and support to vulnerable people. It is a failure by central government to provide adequate funding to the County Council and a failure of the Conservative-administration to get to grips with the financial problems at County Hall.

“Although I am pleased that the Conservative-administration, unlike last year, has not tried to raise council tax by 15%, they are proposing a 6% rise as this is the maximum increase possible without triggering a referendum. This is still unaffordable for many Surrey residents, particularly for those on fixed incomes. The Conservative-administration has been forced into proposing this rise due to the financial crisis at County Hall and the shortfall in government funding for essential services such as adult social care.

“However, the Conservative administration needs to take its share of the blame for the financial crisis at County Hall. In December 2016, the Conservative-administration commissioned and paid almost £25,000 for a report written by the Chartered Institute of Public Finance & Accountancy which contained many criticisms of the County Council’s financial position. It stated that “the Council’s financial plans are not robust and it is at risk of becoming financially unsustainable” and that the council’s financial position was “extremely worrying”. Given the financial mess at County Hall, I think the report was entirely correct in its analysis and that its warnings have not been heeded.

“I welcome the County Council’s plans to use capital receipts to fund innovations and transformation projects for essential public services. By using technology and other innovations, services can be improved and costs reduced which would place the County Council on a sounder financial footing. However, these new rules on capital receipts were introduced in 2016 and the Conservative-administration should have taken advantage of them then and therefore avoided some of the painful cuts to services for Surrey residents.

“With regard to the many empty council owned buildings across the county, the County Council has failed to utilise them properly, instead letting them decay and incurring hundreds of thousands of pounds of costs keeping them empty, in some cases for over a decade. In just one financial year, 2016/17, £307,464 was spent on maintaining 20 vacant buildings. This is a straightforward waste of money and a missed opportunity to bring in capital receipts or rental income which would have improved the County Council’s financial position.

“Because of the financial crisis at County Hall, the Conservative-administration is now gambling about £200m of pounds of council tax payers’ money on purchasing commercial property, such as warehouses and office blocks, hundreds of miles away from Surrey. This is risky and will not promote economic growth within the county as so many of the properties are so far away.

“The Conservative-administration has repeatedly assured residents that income from commercial property will be reinvested in services but it has recently earmarked £3.8m of this income to be spent on purchasing more property. Every day, the County Council is acting more like a property investment company rather than a local authority. Even the Government, in a recent piece of guidance, had to remind councils like Surrey County Council that “local authorities need to remember that their prime duty is to deliver statutory services for local residents” – this is something that the Conservative-administration has clearly forgotten.

“This budget is a bad deal for Surrey residents, who are being asked to pay more for less. The County Council’s own survey of residents revealed that only 37% of people believed that the County Council provided value for money. Surrey residents should not have to pick up the bill or lose essential services because of the failures of this Conservative-administration”.

A link to the Council’s budget papers can be found here (Item 10):

The CIPFA report can be found here:

DCLG guidance on the role of local authorities can be found here:

A link to the County Council’s resident survey can be found here:

The FOI document containing information on the cost of empty buildings can be found here: 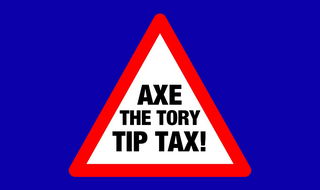 “The Government has indicated that residents should be able to dispose of household DIY waste free of charge and that they are considering changing the law to enforce this. Therefore, we the undersigned call upon Surrey County Council to immediately stop charging residents for the disposal of household DIY waste at its Community Recycling Centres”

The Surrey Advertiser has reported that due to “budget challenges” Godalming will be losing its Police Counter service (currently operating from the Waverley Borough Offices).

“I have worked closely with the community of Waverley for more than 40 years. Waverley has one of the eldest populations in Surrey. This means many residents are reluctant to drive far, or use modern technology. By closing the only front counter in Waverley any resident will now have to travel to bigger centres with their problems of traffic and parking. The Police in this country “police by consent”. If they continue to withdraw from public contact then not only will they risk losing this consent but how do they receive valuable information from the community? The only contact will be as a victim or as a perpetrator and no longer will police be seen as a friendly and helpful organisation. This is a retrograde step, one only concerned in saving money and nothing to do with improving policing in the community”.

I agree with John. Do you? Write to your Police and Crime Commissioner and tell him (http://www.surrey-pcc.gov.uk/contact/).