I refer readers to Councillor Cosser’s letter in the December 21st Surrey Advertiser, “Compass: so much for ‘working together’’”. This was his response to the December 14th contribution from the South West Surrey Compass Group on the value of a cross-party approach for the progressive left in their opposition to the ineffective and entrenched Tory party.

In his letter, Councillor Cosser referred to my involvement during the 2017 snap General Election campaign supporting Dr Louise Irvine, an admirably qualified National Health Action Party member and progressive alliance candidate, in her challenge to Jeremy Hunt, then Minister for Health, over his poor record on the NHS. In this type of situation, and unless and until the “First Past the Post” electoral system changes to one that is more proportional and fairer, those of us on the progressive left should seriously consider lending support to the candidate best placed to give real challenge to the Tories. During the campaign, I was very fortunate to receive advice from Paddy Ashdown who was championing the “More United” cause.

Such “arrangements” are not new. In the 1951 General Election, Churchill himself persuaded the local Conservative Party in Colne Valley not to oppose the Liberal candidate, Lady Violet Bonham Carter, giving her a clear run against Labour. She was narrowly defeated, losing by 2189 votes (4.1%). In the 1997 General Election, and following Neil Hamilton’s implication in the Cash for Questions scandal of the 1990s, Martin Bell was elected MP for Tatton when he was not opposed by Labour and Liberal Democrats who supported him in his anti-corruption campaign. Patrick O’Flynn, the UKIP party’s economics spokesman, said in May 2017 that UKIP could have managed to field candidates across the country but chose to stand only 377 because of promises made to its local branches by many pro-Brexit Conservative candidates and two Labour candidates.

I have been a Liberal Democrat party member for many years, and of course, I still am, but having worked with local members of the Green and Labour parties, it is true that, in the words of Jo Cox, “we are far more united and have far more in common with each other than things that divide us”. I have absolutely no problem working with other progressive left parties to take the challenge to the Tory power-base who seem to govern for the “haves”, while neglecting the “have-nots”.

The Tories have built a baleful legacy of Brexit, Austerity, Universal Credit, homelessness with the deaths of rough sleepers, the need for food banks, hungry children, expensive hospital car parking and a lack of road maintenance leading to proliferation of potholes. What do they have to be proud of? Austerity is a policy of choice. Quoting Aneurin Bevan, “How can wealth persuade poverty to use its political power to keep wealth in power? Here lies the whole art of Conservative politics”.

In the words of Professor Philip Alston, United Nations Special Rapporteur on extreme poverty and human rights: “It thus seems patently unjust and contrary to British values that so many people are living in poverty. This is obvious to anyone who opens their eyes to see the immense growth in foodbanks and the queues waiting outside them, the people sleeping rough in the streets, the growth of homelessness, the sense of deep despair that leads even the Government to appoint a Minister for suicide prevention and civil society to report in depth on unheard of levels of loneliness and isolation.  And local authorities, especially in England, which perform vital roles in providing a real social safety net have been gutted by a series of government policies.  Libraries have closed in record numbers, community and youth centres have been shrunk and underfunded, public spaces and buildings including parks and recreation centres have been sold off.”

I agree with Councillor Cosser in his hope that, “the electorate will ask all candidates some searching questions as to their policies and allegiances and most important of all, what positively they propose to do for our community if elected”.

Whatever 2019 brings, let us stand in solidarity with the vulnerable, the poor, the refugees and the homeless, and work together for the betterment of our society.

Thank you for your letter.

I remain unconvinced by your approach and with your deal. Until and unless you and your Government tell us that this country and every citizen will be better off economically than we are now, then in my opinion there is no way that anyone could support your way forward, let alone unite behind you.
As a Surrey County Councillor, will I be able to reassure residents that potholes will be filled and that, for instance, libraries and Sure Start centres will stay open? Surely the way to renew and reconcile the whole country is to invest in and massively improve public services.
You wrote to us which must mean that you want to hear what we think. If you are sincere in this, then please give us a People’s Vote on the terms of your deal. 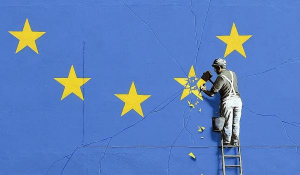 The first South West Surrey Compass meeting of 2018 discussed Brexit, the withdrawal process and its impact. The meeting was chaired by John Gaskell (below middle) and the speakers were Robert Park, Peter Mueller, Patrick Kennedy and Paul Follows (below left). Topics covered the Single Market, the rights of EU citizens in the UK and UK citizens in the EU, the Courts of Justice and compliance. 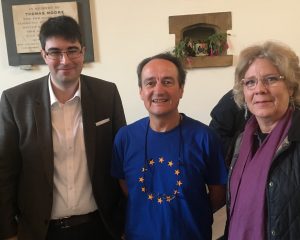 There are serious consequences of our leaving the EU and we will have to face them head-on this year.

There will be an EU Campaign Day in Godalming on the morning of Saturday 13th January.

John Gaskell announces the February meeting of the South West Surrey Branch of The European Movement on February 7th at 7.30pm at The Richmond Arms in 149 High St, Godalming.

The European Movement UK is a grass-roots, independent, pro-European organisation, working to give a voice to those who believe that Britain’s future lies side by side with our European partners. It’s a great chance to meet fellow pro-Europeans and to discuss how you can play a role locally to stop Brexit and to keep the UK in the EU.